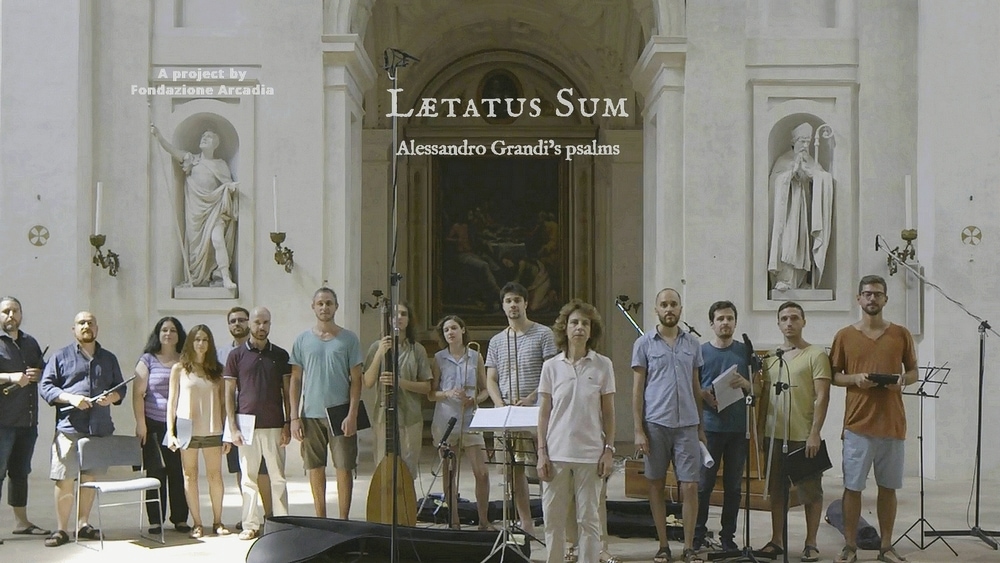 a project by Fondazione Arcadia (2019-2020), following our › previous work on Grandi: Celesti fiori

Publications of church music in northern Italy in the early Seventeenth century tended to fall into three groups: those of motets (often also called concerti); those of psalms (including the Magnificat); and those of Masses.

The last two groups contained music destined for specific services, and indeed psalm collections might include one setting of the Mass – as is shown by the frequency of the title Messa e salmi.

Motet collections, on the other hand, served all sorts of purposes both within and outside the context of church services.

Specific psalms are used for the office of Vespers: the increasing emphasis on Vespers music during this period is confirmed by the fact that in the stocklist of the Venetian publisher Vincenti, psalm collections multiply tenfold between 1591 and 1662, whereas those of Masses multiply only fivefold.

“Staying in Venice as the guest of old friends, I learned that the long unchanged theory of composing music had in part set aside the ancient numbers to tickle the ears of today with new titillations”
(Heinrich Schütz, Preface to his first set of Symphoniæ Sacræ, 1629).

The musical upheaval at the beginning of the Seventeenth century brought some innovations: a new harmonic style and sense of modulation, which spread from secular to all sacred music.
For the big-scale Church music, the tradition of cori spezzati led to the essential idea of using contrasts between groups of soloists and tutti, thus producing a dramatic juxtaposition of frequently unrelated harmonies.
The analysis of Grandi’s works shows so many of the features of the mature Monteverdi that the resemblance can hardly be accidental. It was Monteverdi who so resolutely introduced the secular manner into church music in his 1610 collection. It was he who also kept up this unity of secular and sacred in the anthologies during the second and third decades of the century.
No wonder Grandi was chosen to be Monteverdi’s assistant.

Most of Grandis’ psalms are intended for Vespers. The Vesper psalm setting was a comparatively recent phenomenon in the history of church music, appearing around 1570 and spreading rapidly: after Mass, Vesper became the most important service in Venice.

Grandi only ventured in the field of psalms with large-scale writing and at the end of his life, three psalms collections were published during the last years of his life, one in 1629, two in 1630. Despite the dates of their publication, it is by no means certain that all the works in these prints were written during his last three years in Bergamo as Maestro di cappella at Santa Maria Maggiore, except for the third one (Messa e Salmi concertati a tre voci, 1630).

At Bergamo, we are by no means finished with the Monteverdi’s influence, but it is also clear that Grandi’s changed circumstances meant yet another style of writing was necessary. Both psalms and Ordinary of the Mass (always present in most psalms’ publications) are, by their very nature, large-scale works.

These works, written no doubt for festivals and grand occasions, are of considerable interest: the old contrasts between two separated choirs are no longer important. In these settings the relationship between soloists and tutti, not to mention the instruments, seems very modern, as all these elements have their part to play, not only as elements in the normal concertante style of the Venetian music, but also as separate entities.

Grandi always provides ample variety within a short space, using instruments, a group of soloists, and capella choir for contrasts, changes of mood and variation of texture, as well as rhythmic variation..

The musical setting of the Raccolta terza (two to four obbligato voices supplemented by a number of optional vocal or instrumental parts) are representative of the trend to make any sacred collection adaptable to as many performing situations as possible: a conditions also well suited to the modern performer.

In these Psalms, Grandi displays an originality of his own showing to be even more progressive than Monteverdi himself.

Vespers for the Holy Virgin